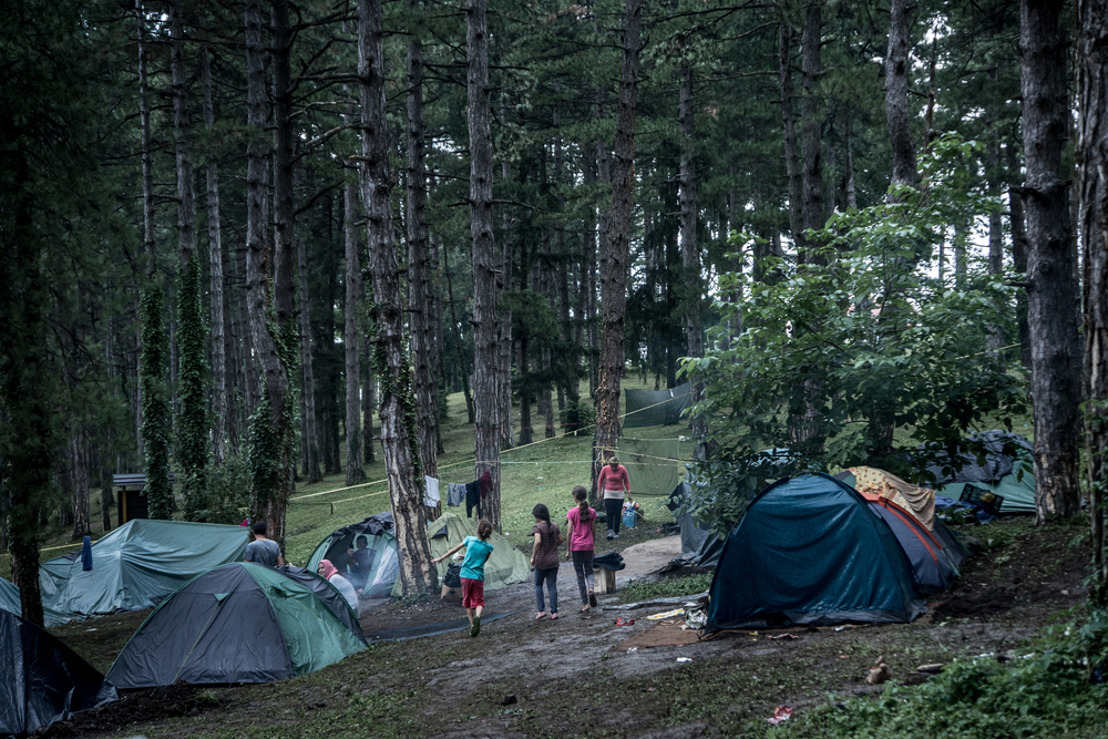 At the edge of the city of Bihać, around 3000 people are living in and around a deteriorating concrete structure. With gaping holes for windows and pools of mud and rainwater on the floor, the five-story former dormitory is now packed with people sleeping on blankets, tents erected in hallways, and sheets hung from ceilings in an effort to provide a modicum of privacy. A forested slope behind the building is scattered with yet more tents.

Meanwhile, just outside the nearby town of Velika Kladuša, approximately 1000 more people are living in tents and improvised shelters made of tarps and other found materials. Trenches are dug around shelters to alleviate flooding from heavy summer storms.

Adults, families and unaccompanied children make up the crowd at both spots. They come from Pakistan, Afghanistan, Syria, Iraq and beyond. Their objective, as all along the Balkan route, is to flee conflict and poverty in their countries of origin.

“A lack of coordinated planning and reactive preparations in Bosnia and Herzegovina has led to inadequate conditions for migrants and refugees here, thus risking serious harm to their well-being, safety and health,” says Gil. “Not only do they not have access to medical services, they also lack basic assistance such as food, shelter, clothes and hygiene services.”

Since June of 2018, MSF has been working steadily on the ground at both of these sites. In cooperation with local medical authorities, MSF operates a small mobile clinic to address the most basic, urgent healthcare needs at each location, as well as to refer more complex yet urgent cases to secondary healthcare in the surrounding Una-Sana Canton.

“Winter is approaching, and so far, it has taken months to provide this growing population with the most minimal, basic services,” says Gil. “Winter doesn’t give you time to lose. It could be paid with lives if preparations are not organized in time.”

People arriving at – and trying to cross – Bosnia’s border with Croatia are coming primarily via camps and informal settlements in Serbia, but some have forged new routes from Greece through Albania and Montenegro to arrive here.

What is clear is that people fleeing conflict and instability at home continue to seek security further on in Europe, and MSF is once again witnessing the disturbing consequences of dangerous border crossings into the EU in absence of safe alternatives.

“These people are stuck in Bosnia and Herzegovina,” says Gil. “In the absence of safe channels to request asylum and international protection, people are forced to continue confronting dangerous journeys and irregular border crossings.”

Caption for B-Roll
This b-roll package includes general shots of the living situation for migrants and refugees gathered at a site in the city of Bihać, testimony from an 11-year-old Afghan boy, and soundbites from MSF’s Bosnia and Herzegovina field coordinator.