Tanganyika province in southeastern Democratic Republic of Congo (DRC) has long been plagued by fighting between communities, and in early 2017 it was estimated that around 500,000 people had been forced from their homes. Around half of these were thought to be living in and around the town of Kalémie, either staying with friends or family, or living in houses made of straw in informal settlements. In August, renewed fighting broke out at some of these sites and people sought safety in the town. Many ended up staying in the school buildings or compounds of Moni, Filtisaf, Hodary and Lubuye, where they found themselves sleeping on the ground under mosquito nets. Many of the displaced are still living in the open air in deplorable conditions.

In the informal settlements, people live close together with very little space between their shelters. This has led to a number of fires breaking out in the past few months – including at the sites of Lukwangulo, Kabubili, Kateke and Katanyika – which have razed swathes of these settlements to the ground. However, fire is not the only risk these people run. Living in overcrowded conditions means that diseases such as cholera and measles can spread easily and quickly. To address this, MSF has been working with the local health authorities to treat patients in the cholera treatment centre in Kalémie regional hospital, and has installed hand washing points in the settlements. As a follow-up to a measles vaccination campaign undertaken in the area in April, a new round of measles vaccinations finished in September, which reached over 20,600 children.

MSF is currently running mobile clinics in around 17 sites. The services offered include primary healthcare and mental health consultations, and those who are seriously ill are referred to Kalémie hospital. MSF has provided over 29,000 consultations since mid-April, the majority for malaria, malnutrition and measles in children under five. Teams have also started working in health structures near certain sites to support primary healthcare. Water and sanitation activities are being undertaken to improve access to safe water and to ensure the construction of latrines and showers.

“Every minute counts and our chances of containing this humanitarian crisis decrease if other donors don’t step in quickly to offer relief to an anguished population. Too many children are caught up in this complex crisis dominated by cholera and conflict and this is robbing the Democratic Republic of Congo of its future”, says Annemieke Tsike-Sossah de Jong, Head of the Humanitarian Portfolio at the IKEA Foundation.

“The situation and the needs of the displaced people in Tanganyika province have been largely overlooked over the past year”, says Liesbeth Aelbrecht, General Director of MSF. “Through this grant, the IKEA Foundation is providing financial support to our activities, and its backing of our work is recognition of the needs in the region.”

About the IKEA Foundation

The IKEA Foundation (Stichting IKEA Foundation) is the philanthropic arm of INGKA Foundation, the owner of the IKEA Group of companies. We aim to improve opportunities for children and youth in some of the world’s poorest communities by funding holistic, long-term programmes that can create substantial, lasting change. The IKEA Foundation works with strong strategic partners applying innovative approaches to achieve large-scale results in four fundamental areas of a child’s life: a place to call home; a healthy start in life; a quality education; and a sustainable family income, while helping these communities fight and cope with climate change. Learn more at www.ikeafoundation.org and www.facebook.com/IKEAfoundation. 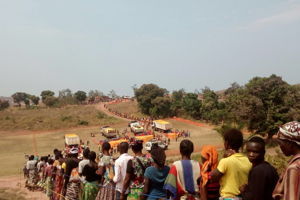