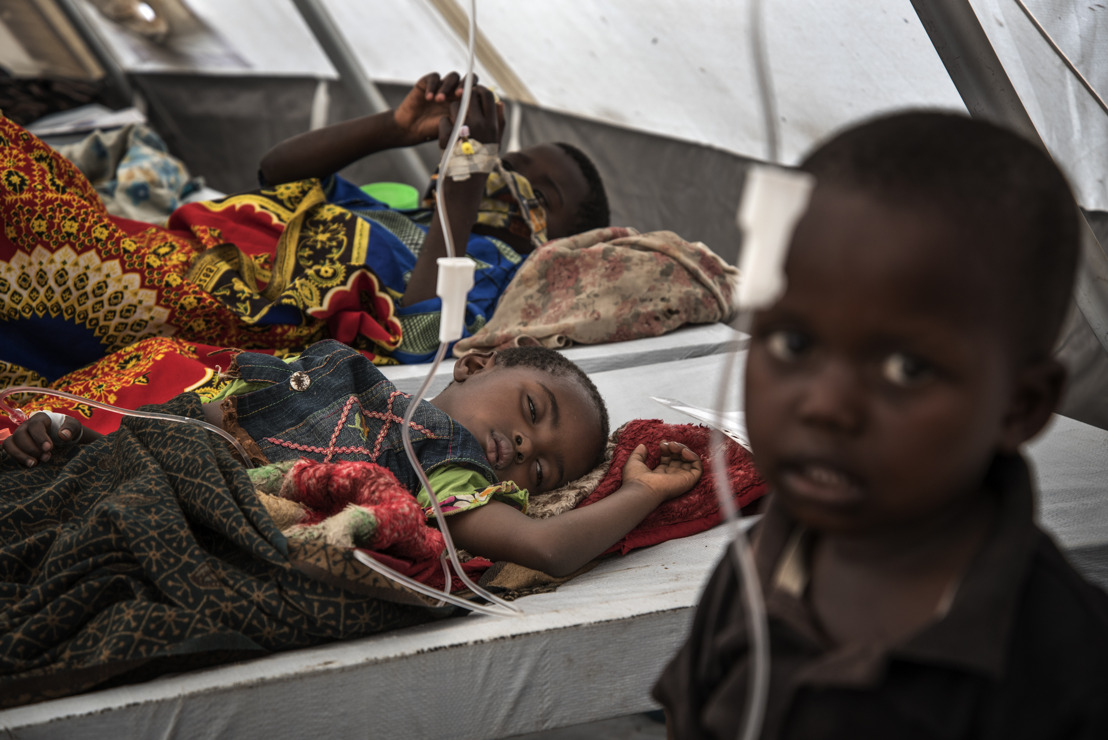 The outbreak erupted in June in North Kivu province and has so far spread to 20 of the country's 26 provinces, reaching epidemic proportions in 11. More than 24,000 people have been affected and 500 deaths have been reported. Cholera is endemic in 6 provinces of the country, but the drought of recent months and the high mobility of the population in certain areas have resulted in a faster spread and a greater impact, with 28 per cent more cases than in 2016.

"We are carrying out a wide response to cover the most affected areas of the country, and the number of patients in our centres has declined in recent weeks”, says Cisco Otero, MSF head of mission in DRC. “However, what has become evident is the urgent need to develop prevention measures, like vaccination and water sanitation in the areas where cholera is endemic, to avoid outbreaks of this magnitude and prevent their spread.".

Since the beginning of the year, MSF's response has been focused in establishing cholera treatment units and centres, and making donations of material in the provinces where cholera is endemic as well as those where the disease has spread. MSF is present in the provinces of Kwilu, Haut-Lomami, Central Kongo, Tanganyika, North Kivu, South Kivu, Ituri, Bas Uélé and Maniema. In recent days, new activities have also started in Haut-Lomami and extended in South Kivu.

"Containing the epidemic is the main priority”, said Otero. “The rainy season is coming and that can spread the virus even faster and lead to a critical situation."

South Kivu province has been the most affected in the last week. There, MSF has received an unusually high number of patients in endemic areas and in its permanent structures in the capital, Bukavu, in Baraka and Sebele, as well as in smaller places like Minova, Kabare, Katana, Idjwi-Kihumba, Lulimba, Missi and Nyange. In all of these locations, the risk of disease spread is enormous, due to the large concentration of people and its geography, which almost forces people to obtain non-potable water from the lake. Minova is the town most affected, with more than 1,400 people treated.

In Goma, North Kivu, where cholera is endemic, MSF has a permanent project running two cholera treatment centers. Since the beginning of the outbreak, MSF has opened another six CTCs in the city, accompanied by community health promotion, multiple rehydration points and assuring water treatment. The size of the current outbreak in this location is partly due to a long dry season and technical problems with water supply, on top of pre-existing poor sewage facilities and a deficient water supply system. These elements combine with poverty and lack of community information make an epidemic more likely. The city is also on the shores of Lake Kivu, and a majority of the population is obliged to take water directly from the lake, despite the pollution by human waste. Between June 26th and September 21st, 6287 patients have been treated and 18 people have died in the worst epidemic that the region has seen since 2012.

Since early September, MSF has also intervened in the health area of Mulongo, after the epidemic arrived in August. Mulongo is located in the province of Haut-Lomami, where the epidemic began in May 2017 in the lake areas, and then spread along the Lulaba River until reaching the city. On 15 August, the Mulongo cholera treatment centre opened. MSF teams support the treatment centre and have also provided five additional oral rehydration points, in addition to the provision of safe drinkable water. In Mulongo, 844 patients have been treated, and 15 fatalities reported. MSF has also built chlorination points along the lake and conducts surveillance and awareness activities.

In Tanganyika, cholera is endemic and the current number of cases corresponds to levels seen in past years. However, the rainy season has not yet begun and with around 100,000 displaced people living in makeshift camps and schoolyards in and around Kalémie, there is a very high risk that the disease will spread rapidly if conditions deteriorate. In the last week, 84 cases of cholera were reported and are being treated by the Ministry of Health in Kalémie general hospital, which MSF supports with rehabilitation, training and donations. MSF teams in the Kalémie area are preparing a vaccination campaign with local authorities and they will increase their sanitation activities. Other teams are evaluating the situation at Manono, Ankoro and Kongolo, along the Lualaba River.

In February and March, MSF treated 332 cholera patients in Matadi and Kimpese (Kongo Central) before transferring their activities. Unfortunately, some actors didn’t respect their commitments and the outbreak returned again a few weeks later, spreading on a regional level and MSF teams had to return to Kimpese. Nearly 1,700 people were hospitalized in the treatment centre and 897 consultations were carried out.