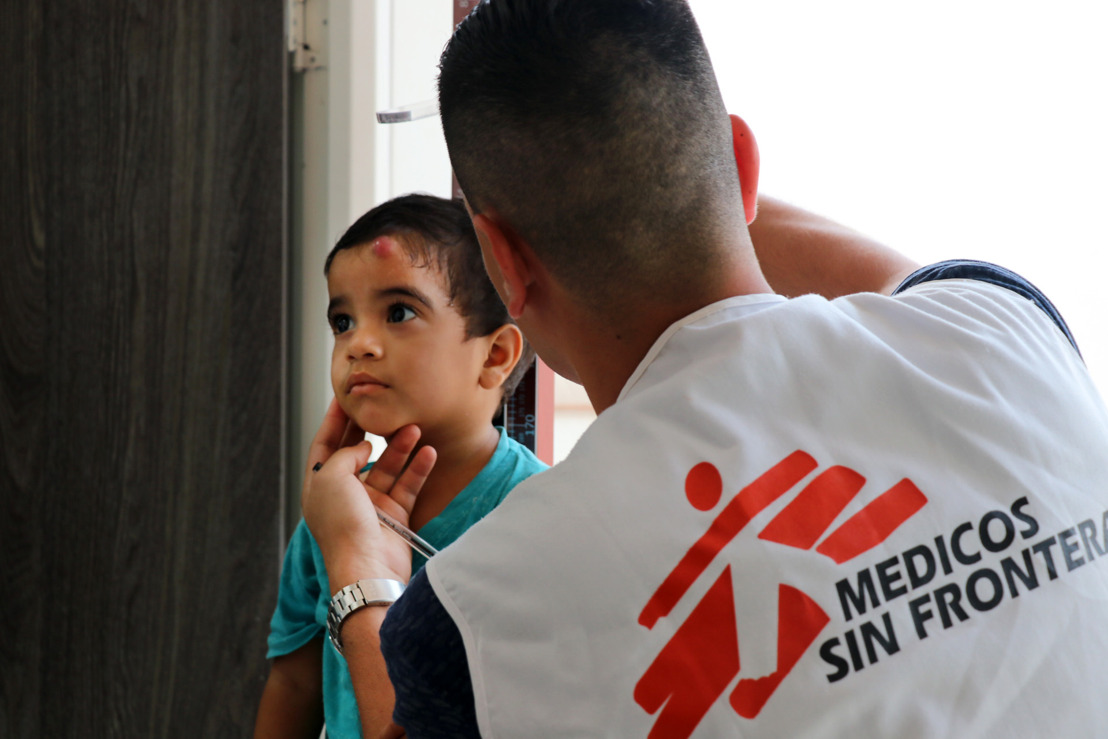 Mittwoch, 24. Juli 2019 — The uncertain lives of Venezuelan migrants on the Colombian border

Venezuelan migrants face numerous barriers to accessing health services in Norte de Santander, Arauca and La Guajira regions. While in theory people are guaranteed access to vaccinations, safe child birth and emergency care, the medical needs of this group are too large for the Colombian system to meet them. These are some of the stories from that unattended crisis.

It was on the third day of eating only mangoes that Poellis Córdoba and her husband realised that it was time to flee Venezuela. After enduring several months of food shortages, which they rationed strictly so that their three small children had something to eat every day, they decided they had to leave the country to survive.

"My husband made a good living as a bricklayer and we lived relatively comfortably. But little by little the situation has worsened to the point that we only had enough money to buy sardines and cornmeal. I remember that in the end we only had enough to feed our children. Then we couldn’t even get that and it was then that my husband arrived with a suitcase full of mangoes. When they were finished, we finally understood that we could not take it anymore," explains Poellis.

First, her husband travelled to meet some of his brothers who had migrated a few months earlier to Tibú, a Colombian border town in the regions of Norte de Santander. Seven months later Poellis arrived with her five-year-old son. And it took another year for them to bring their two older children, aged seven and nine. Today, the whole family lives in the informal settlement of Divino Niño, a collection of houses with wooden floors, polyethylene walls and zinc roofs, where Venezuelan migrants who cannot pay rent end up.

"Life here has not been easy," says Poellis. "Sometimes it is really hard for us but at least food is not lacking for the children," she adds. The poor living conditions and the risk of not getting food are just two of the challenges that Poellis and her family face. Recently, her youngest child developed a small inflammation in his stomach. "As it did not seem serious I decided to take him to the Médecins Sans Frontières clinic because they do not treat Venezuelans in the hospital here unless it is an emergency," she explains.

In the border regions of La Guajira, Norte de Santander and Arauca, state-run medical services are not open to Venezuelan migrants, except for emergencies, vaccinations and child birth. As a result of this, between November 2018 and May 2019, over 12,000 Venezuelans used the primary healthcare and mental health services provided by Médecins Sans Frontières/Doctors Without Borders (MSF). Is the case of Marilyn Díaz, who crossed from Venezuela to Tibú a year ago and gave birth to her second daughter a few days ago at a local hospital. After being discharged, she realised she had to go to MSF for drugs and postnatal consultation.

Among the migrant community, women and children are particularly vulnerable to the lack of access to health services. Between November and May, nearly 40 percent of patients see at the MSF clinics were under five years of age and teams conducted almost 2,500 prenatal care and more than 4,600 family planning consultations. The most frequent health concerns in Venezuelans treated by MSF are skin allergies, respiratory and urinary infections and gynaecological conditions. In children under 14, the most common problems were related to diarrhoea and intestinal parasites.

In addition, almost 1,000 people have received mental health consultation. The main symptoms found are anxiety and depression caused by the conditions of migration, difficulties in finding work and family separations.

"The lack of access to basic and specialised health services for Venezuelans in Colombia is a health crisis that needs more attention from the international community," says Ellen Rymshaw, MSF head of mission in Colombia. "The medical needs of this population have overwhelmed the Colombian health system, which at this time does not have the resources or personnel to attend to them. Due to these limitations, many migrant patients have not been able to receive timely attention in hospital emergency rooms, despite being entitled to this by law.”

“We are calling for greater involvement from the international community to facilitate humanitarian assistance and improve access to healthcare for the Venezuelan population through direct support to hospitals. This is a crisis that urgently needs to be addressed," Rymshaw adds.

It is not only the 350,000 Venezuelans who, according to official calculations, reside in these three border regions that require medical services. They are joined by the thousands of people who cross the border every day in search of medical care and medicines, in many cases for diseases that are not considered emergencies, but that require strict treatment which they cannot get inside Venezuela.

Yamileth Gómez travelled more than four hours to reach Colombia from Seboruco, in Táchira state (Venezuela), in search of treatment for hyperthyroidism, which she was diagnosed with in January. "In Venezuela the medicine I need is not available and here it costs me more than what I can afford at the moment. I even had to come asking for a ride because I did not have money for a bus ticket," she says.

Yamileth used to be a teacher but she had to stop working because of voice problems in addition to other symptoms such as headaches, tachycardia, vomiting and diarrhoea. "MSF will help with the medication. I hope to get it so that I can return to a normal life."

The stories of Poellis, Marilyn and Yamileth show the challenges that Venezuelan migrants are forced live through on the Colombian border. After fleeing the crisis in their country that made scarcity routine, they arrived in a country that does not offer them opportunities for safe housing, work or comprehensive healthcare. The limitations imposed by the public health system and the economic vulnerability in which migrants live make access to medical care a distant and uncertain possibility that puts people’s well-being on hold.

Médecins Sans Frontières/Doctors without Borders (MSF) is expanding its medical activities in Venezuela, where years of economic and political crisis are taking a heavy toll on households and health facilities alike.

With hyperinflation reaching over two million percent this year according to the IMF, the situation in Venezuela has been further exacerbated recently by a power blackout that affected some regions for up to three months, and continuous water outages. “This has an impact on households and struggling health facilities countrywide. Hospitals and clinics in areas where MSF is present have long suffered a lack of medical supplies and staff, and dysfunctional water and sanitation systems,” explains Tara Newell, MSF Emergency Support Manager.

Last month, MSF started assessing health needs in different parts of the country and began rehabilitating sections of the 302-bed Vargas Hospital, one of the reference hospitals in the capital, Caracas. These works are part of a collaboration with the Venezuelan health authorities that is set to expand over the next two years, including the training of personnel and the provision of materials.

MSF has been working alongside local organisations and public institutions in Caracas since 2018, providing medical and psychological assistance to victims of violence, including sexual violence. From January to June 2019, the teams treated 1,635 people for mental health issues, organised 327 group mental health sessions, and supported 100 victims of sexual violence.

Another worrying consequence of the decline in Venezuela’s health system is the rise in preventable diseases such as malaria, of which there has been a significant increase in cases due to the lack of effective epidemic control. MSF supports the national malaria programme in Sifontes, in Bolivar state, an area with numerous informal gold mines, where malaria has spread rapidly due to the high mobility of the population, the poor conditions in which they are living, and a serious lack of resources for the malaria control programme.

Since 2018, MSF teams have tested more than 290,000 people for malaria, treated more than 162,000 for the disease, and distributed more than 76,000 mosquito nets to prevent new infections. Since February 2019, MSF has also been working with the Malaria Institute in Carúpano, in Sucre state, on the Caribbean Sea. Teams are currently working in the four locations with the highest number of cases, providing supplies, facilitating data collection, implementing health promotion and vector control measures, training medical staff, and supporting the identification, diagnosis and treatment of new cases.

In Anzoátegui, MSF partners with a local organization called Fe y Alegría to provide primary healthcare to the vulnerable communities of El Vidono, close to the state capital, Barcelona. The project addresses family planning, sexual and reproductive health, sexual violence and malaria in a school located between Bolívar and Sotillo municipalities. With a student population of 1,670 from a total of 756 families, 3,547 consultations were provided in the first five months of 2019 alone.

MSF is ready to respond to other medical needs resulting from the economic, political and social crisis in Venezuela, including outbreaks of violence. Teams also support Venezuelans on the other side of the border in Colombia, where thousands flee every day due to the insecurity and the lack of food and access to quality healthcare at home. In 2018, we started providing additional medical and mental healthcare, and water and sanitation services, for Venezuelans arriving in Roraima state, Brazil.

MSF has been working in Venezuela since 2015. Teams are currently working in the capital, Caracas, and in Bolivar, Sucre and Anzoátegui states. Between 2016 and early 2018 we also provided medical care in Maracaibo, in the northwest of the country. MSF is an international, independent, medical humanitarian organisation. Our work in Venezuela is funded exclusively by private donations from individuals around the world.