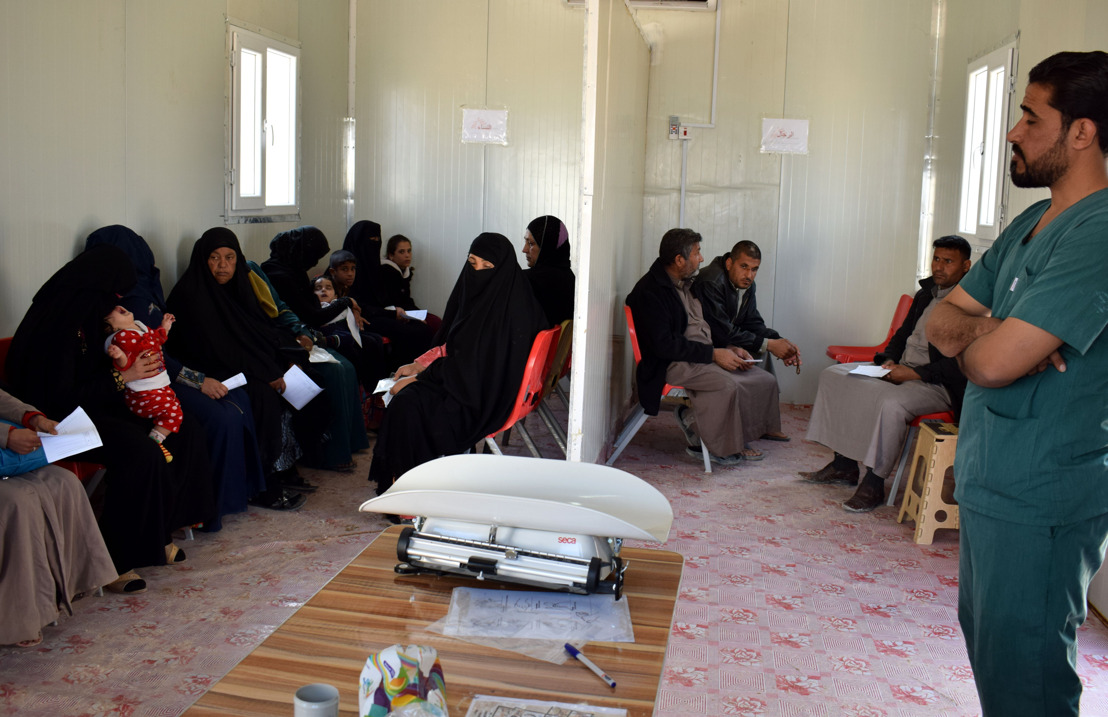 When Islamic State (IS) took control of Anbar governorate in 2014, thousands of people fled their homes. Two years later, the Iraqi army ousted IS from the area, but many families are still waiting for the chance to return home. Most are living in camps with little aid. MSF has opened a clinic in Amriyat Al Fallujah camp, where one team treats people’s physical injuries, and a second team – made up of four psychologists and a psychiatrist – takes care of their mental wounds.

“Iraqis have been through multiple traumatic events over the course of many years,” says Melissa Robichon, MSF psychologist and mental health manager in Amriyat Al Fallujah camp. “When they tell us their story, they often start in 2003. Ever since then, they have lived with continuous conflict and violence.

Many have witnessed the violent death of family members and have lived in constant fear for their own lives, stuck in their houses without enough food, hearing their children cry but without being able to reassure them.

And it seems like an endless nightmare. Although they should be safe once they reach the camps for displaced people, their future remains uncertain. Life in the camps is hard: people are exposed to the extremities of the climate, there are no jobs and returning home is not possible. Many no longer even have a home as it has been destroyed in the fighting.”

Rasul is eight years old. Originally from Fallujah, he now lives in Amriyat Al Fallujah camp with his family. A week earlier, he suffered a common but very painful injury. “My father was filling the heater with fuel and it caught on fire,” says Rasul. “I was playing nearby and the flames burned both my legs.” After eight days in hospital, Rasul is keen to leave. “It hurts a lot when they clean and dress the wounds on my legs” he says. “Being here is boring – I want to go back home.”

Rasul has not seen his real home for almost a year. When fighting intensified in Fallujah, they had no choice but to leave. “We left everything there,” says Rasul’s mother, Bushra, “and I don’t know what happened to the house and our belongings. We can’t go back to our neighbourhood – I think that the military is there, clearing it of explosives.”

Bushra’s extended family has been torn apart by the conflict. “My uncle and a cousin were killed in the war,” she says. “My sisters and brothers with their families are all in different camps. Some are near Baghdad, others are in Kurdistan. We used to see each other often, but now I can hardly ever talk to them.”

Violence, displacement and separation are some of the many triggers that can lead to mental health problems, according to MSF psychologist Melissa. “The situation affects everyone, but in different ways,” she says. “Our male patients complain about a sense of uselessness. It is stressful for them not being able to provide for their families, and sometimes they express the psychological distress through aggression.”

Women are particularly affected by the rupture of the social fabric caused by years of conflict, according to Melissa, while displacement brings particular hardship for women on their own. “The women who are here without their husbands become very isolated, as they cannot walk in the camp unaccompanied,” she says.

Children and teenagers are an especially vulnerable group, says Melissa, as psychological trauma can have a significant impact on their long-term development and overall functioning, sometimes resulting in problems dealing with strong emotions or in learning difficulties and behaviours that put their health at risk.

“The impact can last for years and years,” says Melissa. “As children and teenagers can’t ask for help themselves, we try to reach out to them through our community workers, who visit schools and child-friendly spaces in the camps. We also work with the parents to increase their awareness of symptoms of psychological trauma in children.”

The importance of a strong psychological support system

MSF’s clinic in Amriyat Al Fallujah camp is one of the few health facilities in Anbar governorate that provides psychological and psychiatric treatment for moderate and severe mental health conditions, in addition to its medical activities. People’s needs for mental healthcare are tremendous, yet Anbar governorate is a neglected area, with most attention currently focused on Mosul. But, as with Mosul, the population of Anbar has suffered intense violence over recent years, leaving thousands of people with physical and psychological scars.

“The need for mental health support is obvious when I see the number of patients and the severity of their trauma,” says Melissa. “However, there are many challenges, including the stigma that surrounds mental illness. Many people who would benefit from treatment will not join the programme for fear of what the community might think. There is also a shortage of psychiatrists and psychologists in Iraq, so we put a lot of effort into training our Iraqi staff. Some of them also have their own trauma to handle. They are from the same region and have been through similar things as the patients.”

In a country where people have tremendous needs, but where there is a shortage of mental health professionals and stigma around mental illness, developing  a strong psychological support system will take time and effort, but will be essential for Iraq’s future health.