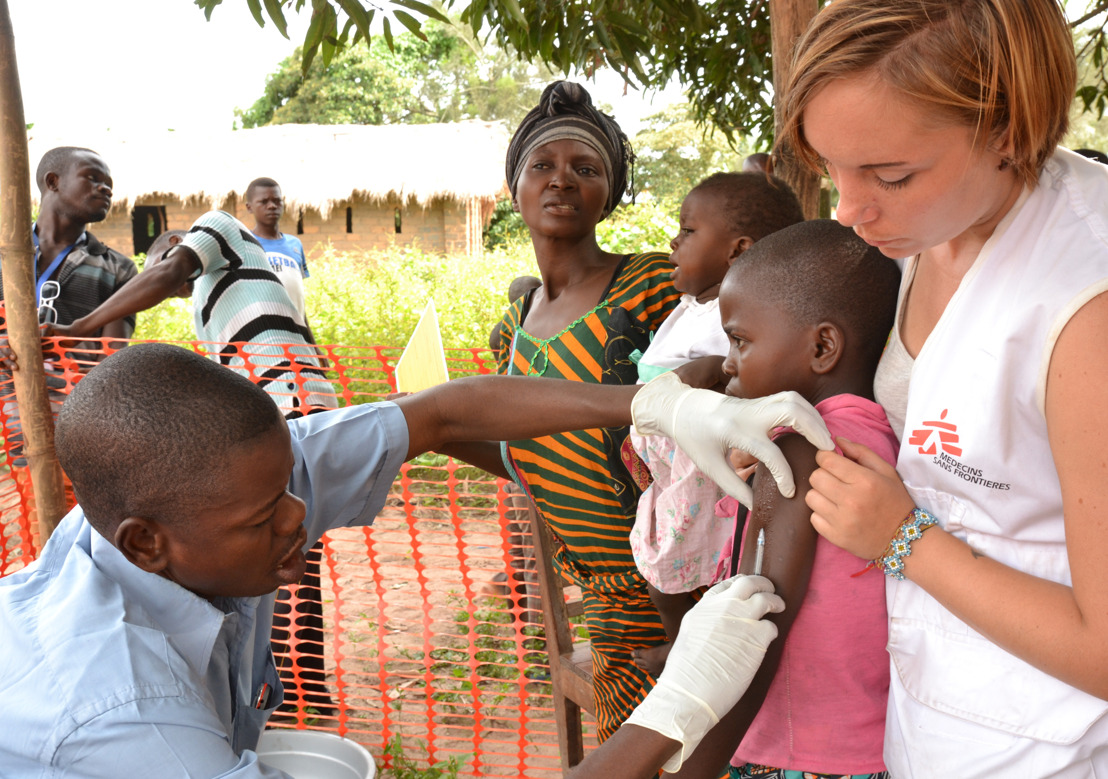 Measles is extremely contagious and is mostly spread through sneezing and coughing. It mainly affects children, especially the under-fives. For those who suffer complications and who fail to receive treatment, it can prove deadly.

For the vaccine to be effective, 95 percent of children aged from six months to 15 years need to be vaccinated. In a country as large as DRC, where roads are often poor or non-existent, and travelling can be hampered by insecurity, considerable logistical constraints exist to reach children in certain areas. MSF teams have travelled by motorbike and on foot down narrow forest trails to reach the remotest areas.

“My team and I wanted to reach a particular area of Equateur province, around 20 km from Bolomba,” says Faustin Igulu, health promotion manager for MSF’s emergency response team. “As there are no roads, we used motorbikes. We had to lift the motorbikes, the cool boxes containing the vaccines and all the rest of the equipment we needed onto wooden planks to cross the rivers. When the trails became too narrow, we left the motorbikes and walked through the forest for hours.”

Despite the difficulties, MSF teams are determined to reach the remotest areas, as children there are particularly vulnerable to measles, due to the scarcity of available healthcare and people’s inability to pay for it.

“All of these efforts are necessary,” says Igulu. “Long distances to reach the health facilities, the lack of economic resources to afford treatment, the use of traditional remedies – all of these factors endanger children’s health in these areas. This is why we do all that we can to reach the most remote villages and settlements where children otherwise would have no access to healthcare or vaccines.”

Children in remote areas who suffer measles with complications are at risk of remaining untreated, or arriving for treatment when it is already too late, endangering their lives. “Many children we have taken care of arrived in a serious condition at the hospital because of the difficulties of reaching healthcare services,” says Igulu. “Children risk their lives if they are treated too late.”

Despite the numbers of children already vaccinated, MSF is continuing its efforts to bring the epidemic to a halt. MSF teams are currently vaccinating children against measles and providing measles treatment, free of charge, in the provinces of Tshopo and South Kivu.

MSF calls on the Ministry of Health, international organisations and donors to rapidly and dramatically scale up their response to the multiple outbreaks of measles occurring throughout the country.

Médecins Sans Frontières/Doctors Without Borders (MSF) is an independent international humanitarian medical organisation which provides emergency aid to people without access to healthcare and those affected by armed conflicts, epidemics and natural disasters. MSF has worked in DRC for 35 years and currently supports the Ministry of Health in 11 provinces, providing healthcare to victims of conflict and violence, to displaced people and to people affected by epidemics including HIV/AIDS. MSF’s emergency response teams are ready to respond countrywide in the event of disease outbreaks, natural disasters or conflict.

Measles can be a very serious disease, particularly for children under five. It is a viral illness which spreads through oral transmission (eg coughing and sneezing) and is extremely contagious. It primarily affects children, causing fever and rashes. There is a high risk of complications, including ear infections, pneumonia, diarrhoea, malnutrition and encephalitis (inflammation of the brain). These complications can lead to convulsions, blindness, brain damage and death. When left untreated, measles is fatal in up to seven percent of cases in some unstable situations.

There is no treatment for the measles virus. Instead, medics treat patients’ symptoms and prevent further complications occurring. The treatment is simple and relies on paracetamol, antibiotics, eye ointments and vitamin A to prevent ophthalmic complications. Patients may require nutritional support as measles is a serious risk factor in malnutrition.

The best way to decrease the mortality risk associated with measles is to reinforce prevention through vaccinations.