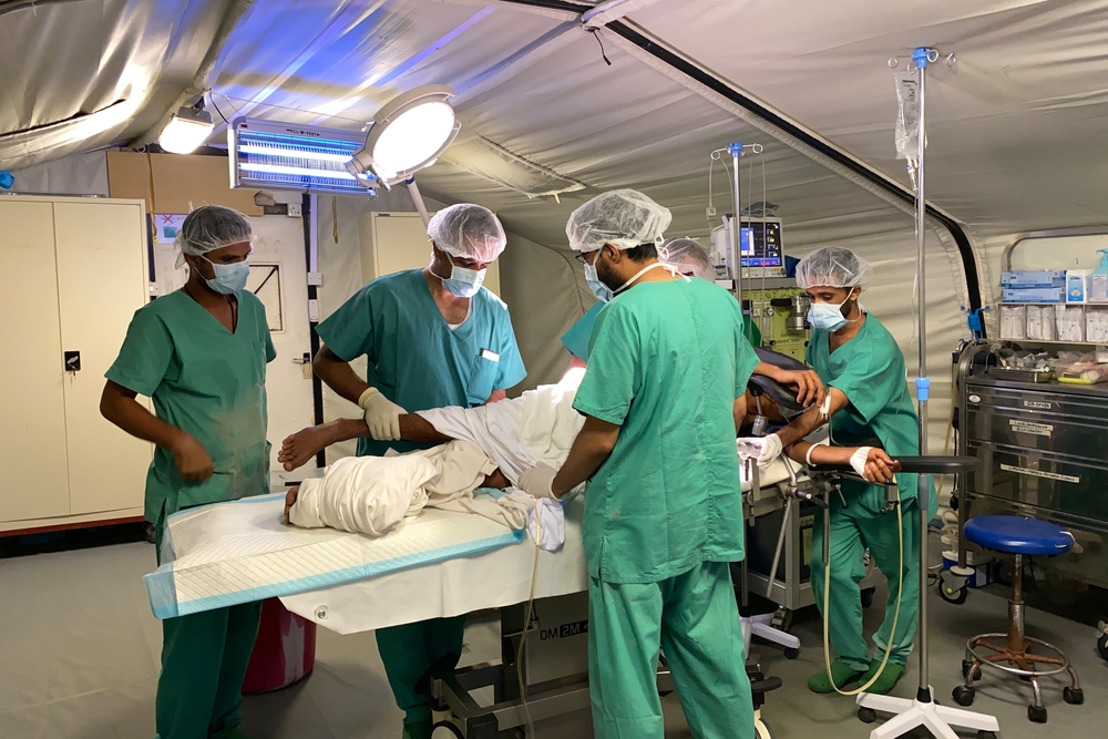 “We treat everyone needing emergency surgery in our Mocha trauma centre – war wounded, traffic accident victims, and pregnant women needing emergency surgical delivery,” says Raphael Veicht, MSF Head of Mission. “But when it’s suddenly almost all civilians coming with terrible weapon wounds, that raises serious questions. What we are seeing in our small hospital is disturbing, and outrageous. Killing and wounding civilians in conflict not only constitutes a severe violation of International Humanitarian Law. It goes further than that; our patients include children, pregnant women, breastfeeding mothers, and men working in a milk-bottling factory that was hit by shelling - and there is nothing that can justify this.”

A woman was brought to the MSF hospital on 29 November with a rough life-saving amputation already done to both her lower legs, requiring corrective surgery. She described how she had joined other women and children, many of them her relatives, to attend a clothing sale in a house in their village of Al Qazah, in the district of ad Durayhimi. She does not know exactly what happened, but there was an explosion – her father afterwards told her that it was a shell that landed on them – and she woke up in the MSF hospital. The house was made of reeds and palm leaves, so provided no protection whatsoever. The woman lists her relatives who were killed in the attack:

“Four women:  my aunt; my brother’s wife; two of my female cousins;

Five children: my brother’s son; two cousins, and two children of other cousins.”

From this shelling attack, the MSF Mocha hospital also treated one other patient, and stabilized an 11-month-old child who needed to be immediately referred by ambulance to the more advanced MSF hospital in Aden. The child died before reaching Aden.

On 24 November, the MSF Mocha hospital received seven civilians patients wounded when a roadside bomb exploded as they returned from a wedding. Reportedly five people were killed in the explosion, including a child.

On 25 November, two children found an unexploded munition on the roadside and were brought to MSF after it exploded when they threw it to the ground; they had severe abdominal and chest trauma wounds.

On 03 December, MSF admitted six people wounded when a milk-bottling factory in Hudaydah was shelled – the patients say at least ten of their co-workers were killed in the strike.

The influxes of weapon-wounded patients to MSF’s hospital provide a confirmation that the frontlines in southern Hudaydah governorate are currently among the most active in the whole of Yemen. The intensifying conflict is also forcing hundreds of families to flee once again from their homes, and the expansion of areas at risk of shelling or other attacks means essential healthcare and food assistance is increasingly limited at the time when it is most needed.

“Whether targeted or indiscriminate, these attacks breach all the rules of war,” says Veicht.  “No. More. Civilians. People just trying to get by, trying to survive, trying to be good mothers or fathers or brothers or sisters – these people are being killed and maimed, and that just has to stop.”